Chronology of the excavation, stabilization, and development of Chimney Rock National Monument to a cultural treasure that can be shared with future generations:

1921: Jean Allard Jeancon, sponsored by the Colorado Historical and Natural History Society (now the State Historical Society), began excavations at the Great House Pueblo, the causeway, the Guard House, and other sites in the area. (Reference: Archaeological Research in the Northeastern San Juan basin of Colorado During the Summer of 1921)

1922: Frank H. H. Roberts Jr., began excavation and survey work that lasted eight years, surveying a wide area that extended outward from the high mesa. Photos show the Great House Pueblo in 1922 before excavation and in 2002 after stabilization.

1925: Jeancon resumed work. He and Roberts worked sporadically in the area until the early thirties.

1958: After a 25-year break in archaeological activity, a University of Colorado professor of Anthropology, Dr. Frank W. Eddy, began investigations in the area. He wanted to document and refine Jeancon’s and Roberts’ early work. He played an active role in getting Chimney Rock established as an Archaeological Area, and listed on the National Register of Historic Places.

1970-1972: Eddy and his students excavate the Great House Pueblo, the Ridge House, the Ravine Site, and the Salvage Site at the end of the parking lot. Eddy has conducted additional research on Chimney Rock as time and money permitted.

1974: Nine hundred sixty acres centered on the High Mesa was placed on the National Register of Historic Places.

1974: In accordance with the Endangered Species Act of 1973, all lands within one-half mile of the twin pinnacles were set aside to protect the aerie of endangered Peregrine Falcons. Some restrictions on access to the Great House remain in effect.

1987-1988: The original Forest Service fire lookout tower, built by the CCC in 1940 and abandoned in 1957, was reconstructed and opened for visitor use.

1988: Dr. J. McKim Malville, professor of astrophysics at the University of Colorado, connected Chimney Rock to the practice of archaeoastronomy. He theorized that the Ancestral Puebloans probably used Chimney Rock’s pinnacles in the observation of astronomical events called lunar standstills. (Malville’s Re-Discovery of Lunar Standstills)

1990: Construction of a barrier-free trail (5.5 to 7 percent grade) provided wheelchair access to the lower ruins. The trail was paved in 1994. Chimney Rock research symposium was held in Durango, CO.

1992: CRAG merged with the San Juan Mountain Association which oversaw the interpretive program at Chimney Rock.

1993-1997: A stabilization crew from Mesa Verde National Park, under the direction of Kathy Fiero, did much-needed stabilization of some excavated ruins.

1995: Chimney Rock designated by Congress as an official Chacoan Outlier.

1997: The two parking lots were paved, a new Visitor Cabin and two new bathrooms were constructed.

2009: Great House excavation/stabilization directed by Dr. Stephen Lekson of the University of Colorado at Boulder. (Video) 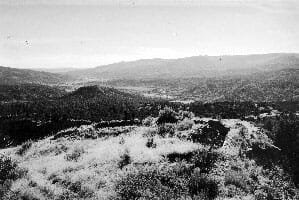 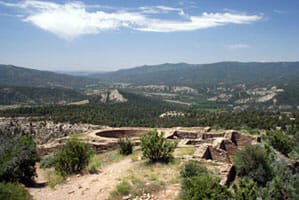 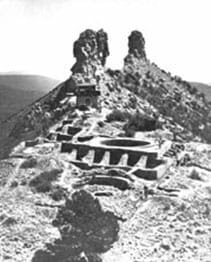