Archaeologists can’t agree when modern humans migrated into North America. Some researchers contend people were here more than 35,000 years ago. Most archaeologists agree people were in North America by 12,000 B.C. These people may have crossed the Bering Land Bridge (Beringia) at the end of the last glaciations, before water levels rose. Other researchers contend people first reached North America in boats, traveling along the coast of Beringia and down the western coast of the Americas. Yet another opinion suggests migrants may have crossed the Atlantic. According to many Native American legends, modern humans developed here. Hopi legend indicates people emerged from the navel of the earth; modern kivas represent this opening.

North American cultural development
Whatever their method of reaching the Americas, the earliest migrants were hunters/gatherers. Paleo-Indian refers to the forager cultures in North America from before 12,000 B.C. to around 7,000 B.C. The earliest well-documented Paleo-Indian culture is associated with distinctive Clovis projectile points. The Clovis culture is, misleadingly, best known for mammoth and bison kills on the North American plains. These people actually were not purely big-game hunters and settled in a variety of environments including in woodlands, tundra, deserts, and along sea coasts. Paleo-Indians left a wealth of evidence in the Southwest where they hunted rabbit, deer, and antelope along with now-extinct mega-fauna such as the American camel, Shasta ground sloth, horse, lion (more than 50% larger than modern lions), and mammoth. The similarity in technologies across North America and into South America during this period fits a model of highly mobile hunters who maintained social connections across a large area.

Archaic people
The Paleo-Indian period transitions into the Archaic around 7,000 B.C., with some local variation across North America. The Archaic Period is characterized by a decline in the reliance on big-game. People began to focus on gathering various edible plants. Localized groups developed more distinctive artifact assemblages suited to the needs of a specific area. These people appear to have had more localized social connections than their predecessors. People spread into many different environmental niches. Some appeared to move with the seasons in search of available sources of food. They used abundant mountain resources during the summer months, then moved to lower elevations during the lean winter months. In the American Southwest, grinding technologies (e.g., mano and metate) and snares are some of the tools Archaic peoples used.

The Archaic Period has generally been broken into three periods: the Early Archaic (8500 B.C. to 5500 B.C.), Middle Archaic (5500 B.C. to 1500 B.C.) and Late Archaic. This last division has become a point of contention in Southwestern Archaeology in recent years.

During the Archaic Period, we see evidence of maize (corn) domestication in the central highlands of Mexico. Although agriculture wasn’t initially pursued, it is clear people knew how to cultivate plants from seeds. Around the world, plants began to be domesticated around 10,000 years ago, during the early Holocene.

Throughout the Late Archaic/Early Agricultural/Early Pithouse period, the American Southwest was shaped by interaction with Mesoamerica. However, there were other dynamic developments across North America. Although residents of large areas of North America continued to employ a hunting and gathering lifestyle, traveling in small bands to varied seasonal resources, some areas began to develop larger communities.

Poverty Point archaeological culture thrived in the lower Mississippi Valley and surrounding Gulf Coast from 2200 B.C. to 700 B.C., during the late Archaic period. Evidence of this culture has been found at more than 100 sites. Poverty Point, with its impressive earthworks, has been interpreted as a ceremonial center. Although the economy of Poverty Point appears to have been based on fishing, hunting, and gathering, these settlements suggest a settled lifestyle. Artifacts indicate the Poverty Point culture had an extensive trade network reaching more than 650 miles. The Adena culture (1000 B.C. to 200 B.C.) of the Eastern US also built earthworks and began to practice agriculture. This culture was a precursor to the Hopewell culture.

Village dwellers
The period between 1500 B.C. and A.D. 500 in the Southwest is known as Late Archaic/Early Agricultural/Early Pithouse. During this period, people moved toward more sedentary village life and agriculture became increasingly important. Early on, researchers saw maize as the main contribution Mesoamerica made to the Southwest and viewed the adoption of agriculture in the Southwest as a gradual local process. Today researchers have come to believe Uto-Aztecan migrations accompanied the maize.

“Maize made things happen…” says Stephen H. Lekson, professor of Anthropology and Curator of Anthropology, Museum of Natural History, University of Colorado at Boulder. The deserts of the Southwest were always ahead of the northern Southwest, including the Colorado Plateau. By 2000 B.C., corn seed appears across the Southwest. By 1000 B.C., maize was being cultivated in some areas. In the Tucson Basin, small pit house villages began to appear between 1700 B.C. and 1500 B.C. At Las Capas, a site near Tucson, irrigation canals appear by 1000 B.C. Interestingly, irrigation systems appear earlier in the American Southwest than they do in Mexico. Perhaps that technology was exported back to the old country. The Olmec culture of Mesoamerica dates from 1200 B.C. to 400 B.C. Another culture which appears during this general period is the Maya culture of Mesoamerica (2000 B.C. to A.D. 1500).

Agriculture brings change
Maize takes root on the Colorado Plateau during the Basketmaker II period (500 B.C. to A.D. 500). Across the Western Plateau, it appears maize and Basketmaker II arrived with people attached. Evidence suggests around A.D. 500, an Uto-Aztecan migration out of the deserts entered the Western Plateau. This interpretation is supported by the dramatic change in the artifact assemblage, a new language, and DNA evidence. Near Chimney Rock, agriculture appears to have been adopted by the local, original inhabitants, perhaps in reaction to the Uto-Aztecan intrusion as local people reconsidered their life ways. 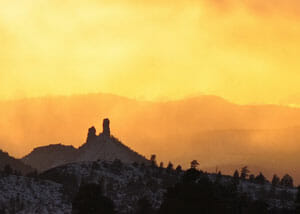 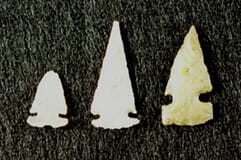 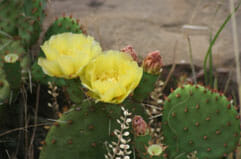