In 2007, a group of Chimney Rock volunteers attempted to send a signal from Chimney Rock to Chaco Canyon using mirrors. In 1990, Katy Freeman, a high-school student in Farmington, NM, accomplished that feat, inspired by researchers’ attempts in the 1970s and 1980s.

Since Huerfano Mountain in New Mexico appeared to be a hub for signaling sites between Chimney Rock and Chaco Canyon, archaeologists in that area were invited to participate in the 2007 experiment. The responses were enthusiastic. Everyone had a professional curiosity and a strong desire to have first-hand, personal experience of the communication system that was used by the Ancestral Puebloans more than 1,000 years ago.

Operationally, the part of Huerfano Mountain to be accessed as a reflecting/viewing site was on Navajo land so a permit was obtained from the Navajo Nation for the experiment.

Each site had a site coordinator who tracked their specific signaling schedule and standardized on a 14 x 50-inch mirror. The Ancestral Puebloans may have used sheets of mica or signal fires. According to the schedule, each site had a 10-minute period to reflect to another site.

More than 60 people participated at the 10 sites, including staff and volunteers from Crow Canyon, Fort Lewis College, USDA Forest Service, National Park Service, Bureau of Land Management, and the University of Colorado.

The program started at 10:00 am on May 29, 2007, and lasted until 2:00 pm. The distances between the sites ranged from 2.7 miles to 67 miles. Mirror flashes from Chaco, Burnt Mesa, and Aztec were seen from the viewpoint at Huerfano. Due to hazy conditions, the Chimney Rock contingent saw only the flashes from Burnt Mesa. Most other sites made reflection contact. However, the wind and dust started to pick up around 11:00 am and the more distant sites, such as Huerfano to Chimney Rock and Huerfano to Far View, did not see a reflection. 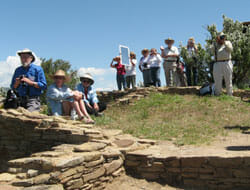