The CRIA team is currently working on projections for the coming Major Lunar Standstill viewing dates and locations. Once those have been established, events will be scheduled and featured on this page. We are hoping to host not only in-person events, but also remote events which people from all over the world will be able to witness the rising of the moon between the pinnacles. There will also be informative lectures leading up to the MLS and opportunities to learn more from professionals in the fields of archaeology and astronomy. Visit us back on this page regularly for event updates and information. 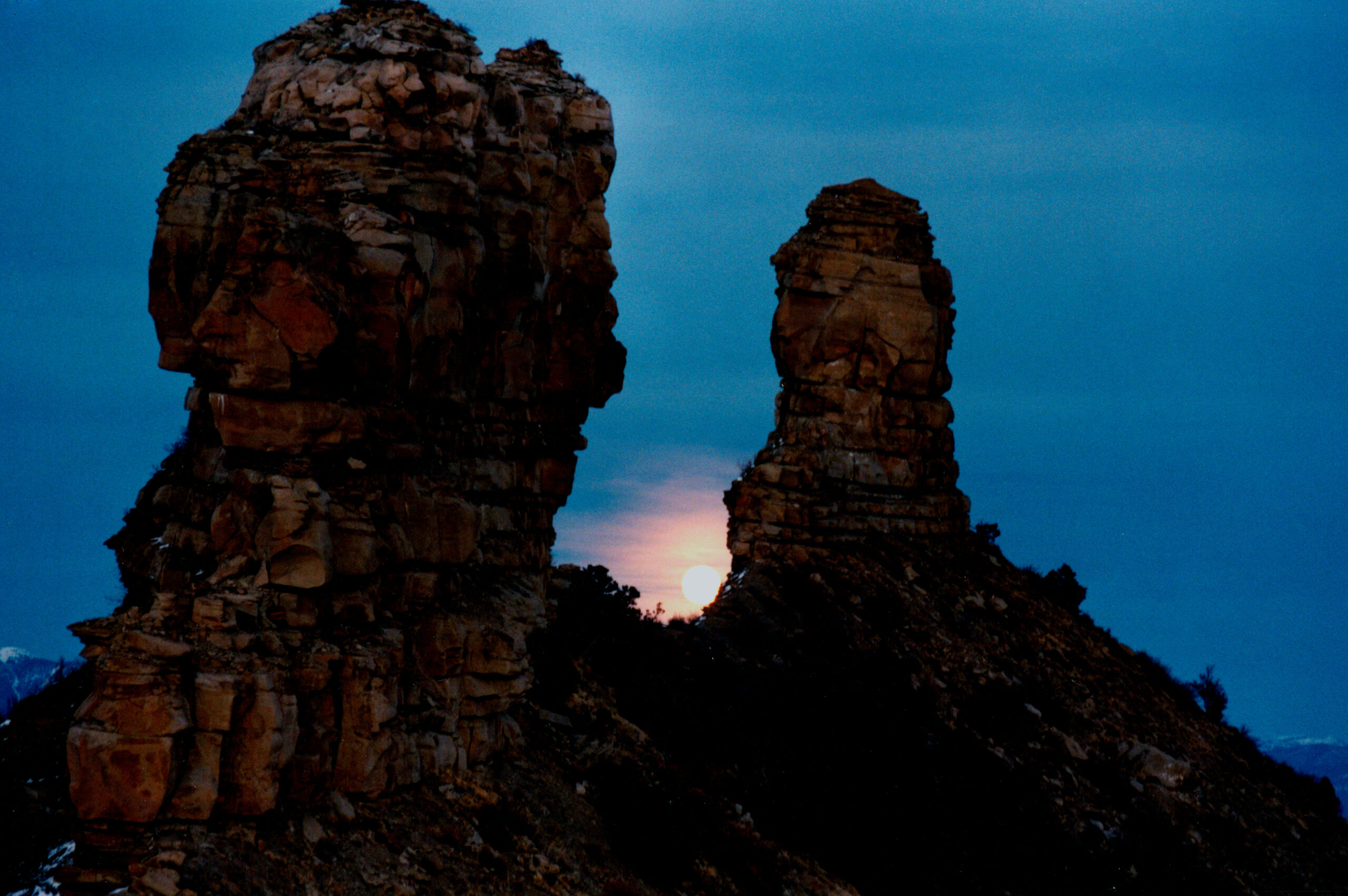 Importance at Chimney Rock
In 1987, Dr. J. McKim Malville, professor of Astrophysics at the University of Colorado at Boulder, predicted, then demonstrated that, at the northern MLS, the moon would rise between Chimney Rock and Companion Rock as viewed from the Great House Pueblo. His discovery may be nothing more than coincidence. However, he proposes that Chimney Rock’s people were more than just aware of these events. He suggests they celebrated them by constructing the Great House Pueblo to mark and revere the beautiful and rare event. In A.D. 1093, a prevalent construction date for the Great House, the moon was rising between the rocks.

From 2004 through 2007, as seen from the recently removed Forest Service Fire Lookout Tower, the MLS moon rose periodically between the two stone pillars that give the site its name. This spectacular sight, which occurs every 18.6 years, is believed to have influenced construction of the Chacoan-style Great House atop Chimney Rock’s high mesa. Whether coincidence or planned, the Great House Pueblo is a natural observatory for the MLS.

What is the MLS?
The moon’s orbit of Earth oscillates or wobbles, gradually causing the moon to rise at different points on the horizon over the years. The entire cycle of wobbling north to south and north again takes 18.6 years. At each end of its swing, the moon appears to pause for about three years, rising at the same point on the horizon before beginning to move back toward the opposite end of the swing. This pause is known as a MLS.

The most recent MLS began in December of 2004 and lasted for 3 years. The next will begin in 2021. The cycle is complex. For the first half of each year, the moon rises during the day in phases from near-full to a mere thin crescent, rising earlier each month from early afternoon to early morning. In July, the moon rises between the rocks as a nearly invisible new moon around dawn. From August through November, the waxing moon rising between the rocks ranges from crescent to nearly full. Moonrise continues to come earlier each month, from just before dawn to just before sunset. Finally the full moon rises between the rocks at sunset near the Winter Solstice in December. The duration of the moon’s passing between the spires was different for each rising but generally lasted from five to fifteen minutes.

Why Chimney Rock?
The majestic natural stone pillars of the Chimney Rock formation have a unique connection to the major standstill of the moon. Seen from the Great House Pueblo, the stone towers are slightly out of line with each other, framing a narrow window of sky between them. At sunset near the day of the Winter Solstice during the MLS, the full moon rises between the stone pillars, caught in this thin window of sky. The phenomenon is only visible at limited locations on the mesa top (from the center of the eastern kiva to the north).

There is debate over when the Chimney Rock Great House was constructed. One wood sample dates to A.D. 1076 and has been suggested as representing the earliest construction phase of the structure; the MLS was visible in A.D. 1076. Most wood samples date to A.D. 1093-1094, another MLS; this date represents either construction of the structure or a major remodeling episode. This may be nothing more than coincidence. However, researchers in archaeoastronomy, the study of how ancient people related their lives and world to the sky, see more possibilities. Malville proposes that Chimney Rock’s people were more than just aware of these events. He suggests they celebrated them, in part, by constructing the Great House to mark and revere the beautiful and rare lunar events captured or protected by Chimney Rock’s twin monoliths. Interestingly, new wood samples recovered during the 2009 excavations at the Great House date to earlier Northern Lunar Standstills (e.g., A.D. 1018) and minor lunar standstills (A.D. 1011). The reuse of wood salvaged from earlier structures probably accounts for the presence of these samples and may represent earlier commemorative construction events.

The alignment between the Great House Pueblo and the Chimney Rock pillars and the moon is real. It has been calculated, surveyed, confirmed, and photographed. The question that remains unanswered is its cultural and spiritual importance to the ancient people of Chimney Rock. Despite the impressive record of archaeological research, we face a mystery that may never be solved.