The Ancestral Puebloans established an impressive base of calendrical knowledge.  This knowledge was imbedded in community design at Chimney Rock.  However, any discussion of astronomical alignments must recognize the difficulty in distinguishing which alignments were intentional from those that may have been random.  It is clear that some alignments (e.g., equinoxes) were well recognized and intentionally expressed architecturally while others (e.g., the positioning of each dispersed structure along Peterson Mesa) may simply be the by-product of settling on a ridge top.

The irregular horizon provided by the San Juan Mountains is a perfect backdrop for establishing a solar calendar. Priests observing the movement of the sun from south to north and back again to the south could accurately predict important times of the year such as the equinoxes and solstices. These events were probably  critical in scheduling festivals and activities involved in planting and harvesting crops. This information could have been communicated easily to other parts of the Chacoan World.

Chimney Rock is perhaps best known as an observation point for the Northern Major Lunar Standstill, which is discussed on a separate webpage.

The ancient Puebloan peoples based much of their daily life activities, religious rituals, and festivals on what they observed around them on earth and in the sky. They were especially attentive to what was happening from day to day with the sun and the moon. Over periods of time, they learned certain of these astronomical events were cyclical and what followed often affected weather patterns, hence optimum times for planting and for harvesting. Those individuals who had this esoteric knowledge of being able to predict, almost to the day, when certain  astronomical events were likely to occur attained prestige and control which ultimately gave them political power and social ranking.

Across the Piedra River to the west, the high, long cliff of Peterson Mesa affords an eastward view that captures the two Chimney Rock towers in profile as the sun rises between them. From north to south along the cliff, the first rays of the rising sun fall on a series of buildings and mark the days from late January through the Summer Solstice in June, before beginning the return trip to the north and the Winter Solstice.

The two-story Chacoan C-Block Pueblo on Peterson Mesa has a direct line of sight to the Great House. From the Great House, there is a direct communication link to Huerfano Peak and from there to Chaco Canyon. Any information about sun or moon rises as seen from the Chacoan C-Block Pueblo could have been communicated, via signal fire, to Chaco Canyon.

From the location of the Chacoan C-Block Pueblo, the sun rises between the chimneys just five days before the fall equinoxes and after the spring equinox. The precise cycle of the sunrise between the double chimneys would have been invaluable to the Chacoans for maintaining ceremonial and agricultural calendars.

Seen in this light, the sites that stretch along the rim of Peterson Mesa can be interpreted as calendrical observation stations that use the twin spires like a foresight for noting the sun and moon rising between the chimneys. Each different station could be used at different times of the year to set or correct the ceremonial calendar.

The observatories along Peterson Mesa would have been a far better system than the one used at the Sun Tower, a small structure along the eastern cliff edge of the High Mesa site group. Dr. J. McKim Malville, professor of Astrophysics at the University of Colorado at Boulder, suggests it provides a day-to-day solar calendar as the sun rises over the sharp mountain peaks and valleys of the eastern horizon.

From Peterson Mesa, the residents of the Chacoan C-Block Pueblo also would have been treated to the view of the full moon rising between the chimneys during the time of the spring and fall equinoxes. During the summer and winter solstices, the moon rose between the gap in the twin pinnacles at 1/4 and 3/4 phase.

The Chacoan C-Block Pueblo would have been the site for yet another spectacle in the sky that occurred within the gap between the twin chimneys. An eclipse of the moon, including the full moon, recurred during the years between A.D. 1020 and A.D. 1100, according to Malville.  It happened frequently during the 80 years for which Malville provides dates in The Ultimate Outlier. This would have been important in a culture that respected the moon and the power of the astronomer priests to actually predict the event before it occurred.

It is likely the astronomer priests in Chaco Canyon learned to depend on the sky-watchers at Chimney Rock who had set up a string of observatories along the rim of Peterson Mesa. By watching for sunrises and/or moonrises in the sight formed by the twin chimneys, the priests could precisely predict, from each observatory’s alignment to the pillars, when an event such as the vernal equinox would occur. Once this information was relayed to the astronomer priests in Chaco Canyon, the priests could schedule an appropriate event.

In his chapter on Calendrical Knowledge and Ritual Power, in The Ultimate Outlier, Dr. James W. Judge, principal investigator of the Chaco Project for the National Park Service and University of New Mexico from 1971, suggests Malville’s theories about Chimney Rock providing the regional Chacoan system with a precise calendar bolsters the power of that information within Ancestral Puebloan culture. For example, if Malville is correct and calendar information is one of Chimney Rock’s primary contributions to Chacoan culture, Judge thinks, with time, the astronomer priests who set the calendar for scheduling (and probably conducting) the pilgrimage trade festivals or ceremonial rituals would have risen to a high social status within the resident Chacoan or Chimney Rock community. Over time, as they refined their ability to predict astronomical events to local villages, the astronomer priests would have gained sufficient prestige and control over the festivals, ceremonies, and rituals that the villagers’ attendance at these events would have evolved from voluntary participation to required.

Judge elaborates on his theory of the high social status and political power gained over time by the astronomer priests of Chaco Canyon. He puts it this way: “Among modern Puebloan society, influence in the community, social status, and prestige are based on the possession and access to ritual knowledge. Esoteric knowledge of rituals and ceremonies confers special power. The possession of ritual and ceremonial knowledge is the most powerful instrument in the attainment of social status within Puebloan society. The positions of political power and social ranking are then maintained by restricting access to that knowledge.”

While the power of the astronomer priests must have been enhanced by their ability to predict astronomical events to the local community before they happened, the inverse was probably true. The inability to predict events that occurred in the heavens would have decreased their power. For some events, such as the star-rise of the Taurus Supernova in A.D. 1054, they could not have had prior knowledge. Another surprise event was a total solar eclipse in A.D. 1097.According to Malville, it lasted for four minutes in mid-afternoon when the sun was high in the sky and may well have terrified the whole community. He suggests this unanticipated and potentially very frightening astronomical phenomenon initiated a decline in the credibility of the astronomer priests in the Chacoan system.

Does the structure tell the story?

The Ancestral Puebloans had no written language and left no clear record of their thoughts and beliefs. Even without the written word, the Chacoans left clues in the very fabric of their buildings. The Great House is located on the closest patch of ground to the twin pillars, on the highest flat area above the valley floor 1,000 feet below. The difficulty of carrying stone and tree trunks and earth and water up to this place, and of keeping its people fed and warm and supplied with water, argues powerfully that this was an important place to be. Contemplating how they built this impressive structure is intriguing.

Architecturally, the long walls of the Great House are not parallel. The northerly east-west walls line up with a small basin carved in solid bedrock 2000 feet southwest of and below the Great House. If you stand at the stone basin and look at the northerly wall of the Great House at the time of summer solstice, you will see the sun rise centered on this wall. Viewed from this same stone basin, the southerly point on the Great House lines up to a spot in the sky where the Crab Nebula Supernova appeared for more than 3 weeks around July 4 in the year AD 1054.

In addition to its alignments with the Crab nebula Supernova and the summer solstice sunrise, the Great House connects the narrow gap between the rock spires with the rising moon during the MLS. It stands at the only spot where the moonrise can be seen at the peak of the 18.6-year cycle. By themselves, these facts can’t prove the Great House Pueblo was specifically constructed to celebrate the sun or stars or the lunar standstill. But they do imply the people of Chimney Rock were sky watchers. They observed, they remembered, and they may have captured sky cycles and events by linking their buildings to them through natural features and architectural alignments.

Within recent years, additional research at the Chimney Rock Great House and within the larger Chimney Rock community, has posed additional questions about the nature and control of astronomical knowledge at the site.  A series of tree ring dates (dendrochronological samples) recovered from the 2009 excavations at the Great House indicate wood collected during a Northern Lunar Standstill over half a century before the construction of the Great House was incorporated within the structure, as was wood collected during a minor lunar standstill a few years earlier.

It is likely these wood samples were re-used from earlier structures built to commemorate astronomical events.  These findings suggest someone was observing astronomical phenomenon before the Chimney Rock community was fully integrated into the Chacoan system.  Or perhaps we should question the nature of the Chacoan regional system itself? Forest Service researchers have also identified additional alignments within the Chimney Rock community (pertaining to the equinox and winter solstice).  The astronomical knowledge of the inhabitants of Chimney Rock was vast; our understanding of it limited. 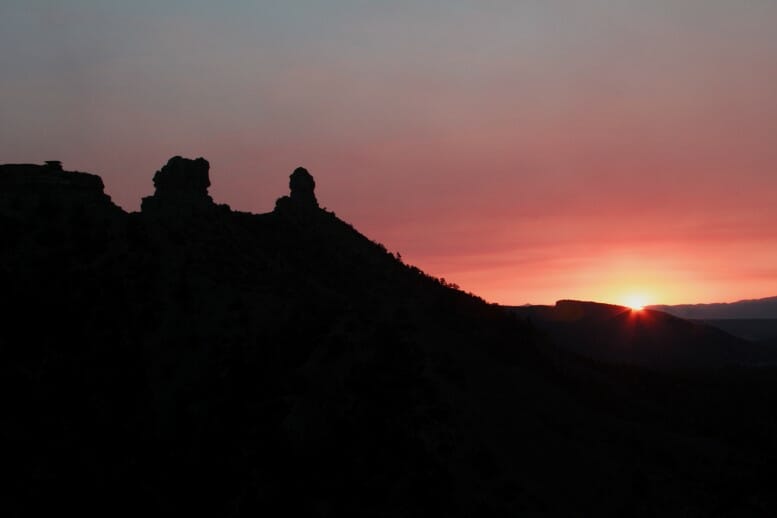 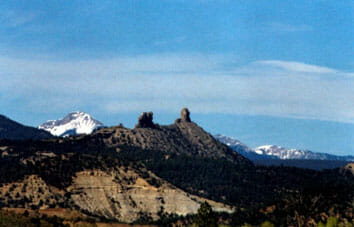 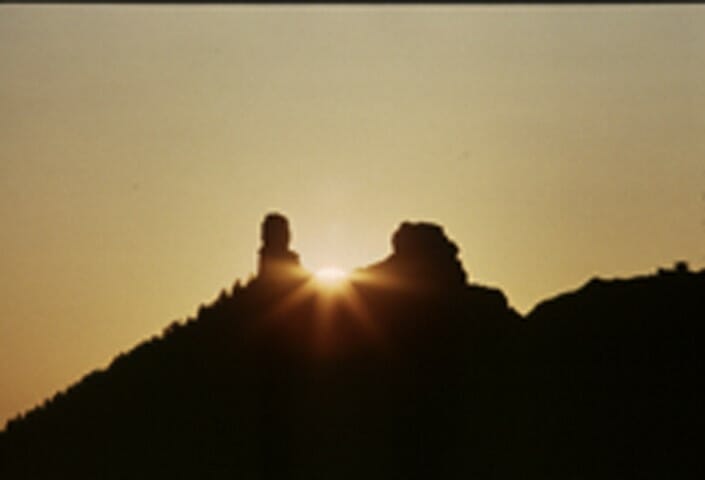 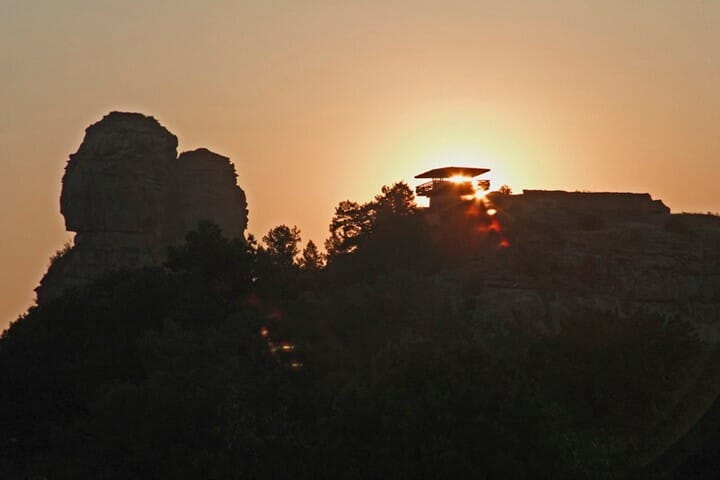 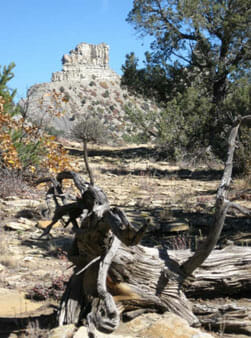 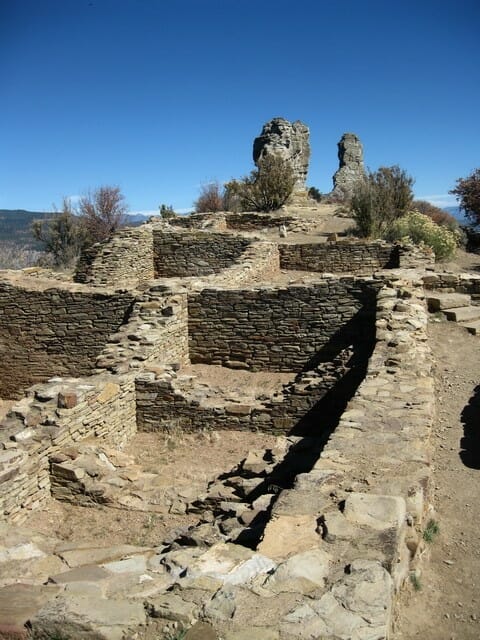 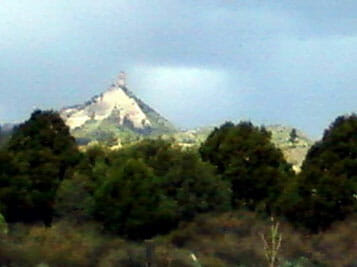 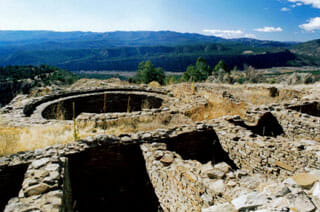