One of the most intriguing concepts in Chimney Rock archaeology is that the inhabitants of Chimney Rock were part of a larger regional community centered at Chaco Canyon, New Mexico. Various professional archaeologists working in the Four Corners area over the past 25 years have concluded that Chimney Rock served as an outlier or satellite community that shared economic goods and services with other outlier communities throughout the San Juan Basin. Evidence supporting a Chaco-Chimney Rock connection is architectural, ceramic, and archaeoastronomical; the connection is further supported by a communication system linking the sites.

Chaco Canyon is seen by Dr. James W. Judge, principal investigator of the Chaco Project for the National Park Service and University of New Mexico, 1971 to 1982, and recently retired professor of Anthropology at Fort Lewis College, Durango, as being a ceremonial center used for “the social integration of a dispersed population through pilgrimage festivals and ceremonial rituals.” The festivals were related to the re-distribution of goods (corn, timber, pottery, meat, etc.) and the ceremonial rituals related to a worship of the sun and moon. He theorized that Chimney Rock probably served as an occasional host of these pilgrimage festivals during the times of the Northern Major Lunar Standstill Event. The non-local peoples who traveled to Chimney Rock to attend the economic redistribution or trade
festivals and religious ceremonies in honor of the sun or moon could have resided in the Great House Pueblo. The Great House also could have served as a repository to store various economic goods while awaiting future redistribution.

San Juan Wealth
Judge’s theories about Chaco Canyon, and Chimney Rock’s association with it, center around his belief that Chaco Canyon was a resource-deficient area almost entirely dependent on outlying communities in the San Juan Basin for providing various non-local trade goods. Chimney Rock, at the northeast periphery of the Chaco system, was resource-rich in timber and game animals, and probably provided Chaco Canyon with calendrical knowledge gleaned from observations of the sun and moon from various sites along the High Mesa and Peterson Mesa.

According to Judge’s theory of Chaco Canyon, the Ancestral Puebloans intentionally dispersed their farming resources out to the peripheries of the San Juan Basin to maximize the collective agricultural yield. The collected harvests then were transported to Chaco Canyon along its road system, stored in the great houses there, and redistributed to areas in need. This interaction system had the effect of smoothing out the harsh environmental conditions that could exist at any time anywhere within the whole Chaocan regional system. It gives you a higher likelihood of success to have many different areas growing foodstuffs. The region is so vast that it would be unlikely for all areas within the network to face harsh environmental conditions at the same time.

A weakness of Judge’s redistributive model is that Chimney Rock is at the outside limit for practical trade of subsistence items using porters. Recent settlement studies also suggest that a larger community of hundreds or thousands was centered around Chimney Rock. While the site could have been the ceremonial center of the area, an increased population would weaken the redistributive model. However, a redistribution system for goods, as outlined in the model proposed by Judge, could have provided some protection against catastrophic agricultural failure. Higher value exchange items could have easily been traded between Chaco and Chimney Rock without being eaten up to fuel transport.

Chacoan festivals and ceremonials
Besides various goods coming to Chaco for storage and subsequent redistribution, people were also traveling along the road system to attend various economic festivals (i.e. trade of goods), and ceremonial rituals. Judge thinks the great houses could have been guest residences. By this theory, which Judge calls his Chaco-Hilton model, Pueblo Bonito, in Chaco Canyon, could have been the location for stored goods brought in for future redistribution and a residence for people making pilgrimages to attend religious ritual ceremonies. Seen in this light, Chimney Rock’s Great House Pueblo also could have been a repository for economic trade goods and a kind of hotel residence for visiting guests, merchants, astronomers, priests, architects, etc.

Chimney Rock Great House After an examination of the previous 1,000 years of Ancestral Puebloan prehistory, Judge has refined his Chacoan Redistribution Model to include the transfer of goods between outlier communities instead of theorizing that all goods were channeled through Chaco. The sheer number of village sites within the San Juan Basin argues for a regional redistribution system dating from the Sambrito Phase (or Basketmaker III Period; A.D. 400 to A.D. 700). Judge thinks a previous system of redistribution was in place that allowed, later on, for the time-consuming construction of Pueblo Bonito in such an isolated, dry, resource-deficient place.

Judge’s theories of regional association and trade between distant Ancestral Puebloan villages is supported by John Roney, Bureau of Land Management, Albuquerque, NM, in his chapter on Chimney Rock and Chaco Culture associations in Chimney Rock: The Ultimate Outlier. Roney concurs with Judge that, by Basketmaker III times (the Sambrito Phase; A.D. 400 to A.D. 700), the typical settlement patterns along the San Juan River involve residences surrounding a subterranean, ceremonial kiva. This settlement pattern evolved over time into the later Late Pueblo II (Chimney Rock Phase; A.D. 1050 to A.D. 1125) Chaco-style settlement pattern of having a non-subterranean Great Kiva constructed in the middle of the local resident community. The social or cultural implications are the same however – the kiva is located in the center of the community and ceremonies are conducted there to integrate all the various divisions of labor found in the local village.

Roney extends his discussion of region-wide, San Juan Basin cultural unity by stating that, since Basketmaker III; Sambrito Phase times (A.D. 400 to A.D.700), the similarity in social settlement patterns implies a region-wide social integration between the various communities and bespeaks direct contact between all the villages throughout the Four Corners area. He notes the extensive distribution of similar pottery wares and thinks this is explained, culturally, as indicative of a homogeneous culture with similar belief systems and direct interaction about all things social, economic, and ceremonial.

After the end of Late Pueblo II (the Chimney Rock Phase), around A.D. 1125, the Four Corners environment changed to less rainfall, smaller crops, the failure of priests to predict these changes and, during the Pueblo III period around A.D. 1200, the Four Corners area, and Ancestral Puebloan culture itself, is immersed in warfare. But after the fall of Chaco Canyon, Judge thinks, for a while anyway, the San Juan Basin Ancestral Puebloan villages, who had just finished being Chacoan outliers, went back to trading among themselves just as they did before the rise of Chaco Canyon.

Chimney Rock’s contributions to redistribution
Chimney Rock Prayer Feather HolderIf Judge’s theories about Chaco Canyon are correct, and various satellite or outlier communities existed to support the Chacoan capital at Pueblo Bonito, what was Chimney Rock’s contribution to the Chacoan regional redistribution system? Judge and other authors of Chimney Rock: The Ultimate Outlier, think Chimney Rock gave Chaco Canyon goods such as meat (big game animals like elk, deer, etc.) and timber, but some ceremonial items as well. For example, one Ultimate Outlier author, Mary Sullivan, notes the feather holders discovered at Pueblo Bonito were made from the same clays as the ceramic feather holders from Chimney Rock. In fact, eleven of the seventeen feather holders found at Ancestral Puebloan sites were from Chimney Rock.

In addition to material goods, the Chimney Rock area could have communicated calendrical knowledge to Chaco for setting the dates of economic festivals or religious ceremonies and rituals. Because of the cultural significance of the Northern Major Lunar Standstill Event, Chimney Rock could have been an off-site host of their own Chacoan ceremonies and pilgrimage festivals during those special times when the moon rises between the spires as seen from the Great House Pueblo. Other festivals could have celebrated the sun rising between the pinnacles as seen from Peterson Mesa or served to redistribute the meat and timber resources reaped from the local environment and stored at Chimney Rock’s Great House Pueblo. 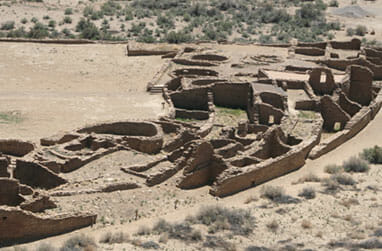 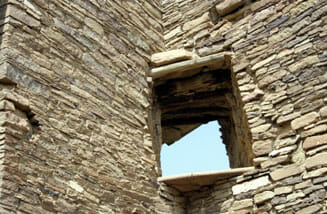 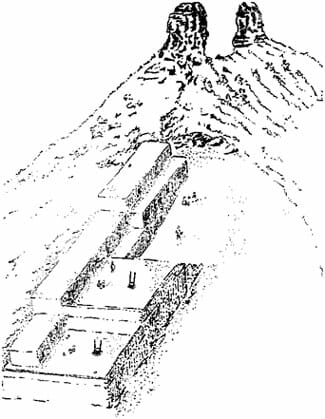 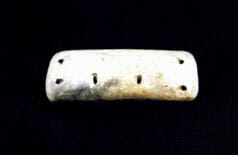