In 2007, Congress approved an extensive stabilization project at Chimney Rock. Half of the cost was funded federally by the Save America’s Treasures Program, National Park Service, while the other half was the responsibility of the Chimney Rock Interpretive Association to raise through private funds and donor grants. If CRIA could not raise its share, the project would not be funded. CRIA raised more than its 50% share and project funding was approved in March 2008. Granting agencies and funds used toward the 50% match for the project included: Colorado State Historical Fund, Gates Family Foundation, Chimney Rock Interpretive Association, University of Colorado, and Tourism Cares for Tomorrow. Total funding was $500,000.

The goal of the project was to stabilize failing walls at Chimney Rock. Stabilized structures that required work included the Chimney Rock Great House, Great Kiva, Ridge House, and Pit House. These sites had been stabilized in the 1970s after excavations by Dr. Frank W. Eddy, recently retired professor of Anthropology, University of Colorado at Boulder. Some emergency stabilization work had occurred since. As with any masonry wall exposed for nearly 40 years, the effects of water migrating through the walls and the freeze-thaw cycle were beginning to show. It was determined that fill equalization (having similar amounts of dirt on either side of exposed walls) would help reduce pressure on the walls and diminish the chances of catastrophic failure. In some cases fill was removed on one side of a wall and deposited in the adjacent (previously excavated) room to accomplish fill equalization.

PHASE I: EXCAVATION
A three-phase plan was implemented. The first phase was fill removal (excavation). This involved excavation of two rooms within the Great House Pueblo (Rooms 5 & 7). The majority of each room was taken down about 1 meter; one quarter of each room was excavated to bedrock and later backfilled. Dr. Stephen Lekson, University of Colorado at Boulder, oversaw the Summer 2009 Excavation Project from June 1 to July 5 at Chimney Rock (CU News Center article).

The goals of the fill reduction phase of the project were:

Considerable wall debris and rubble were expected and were excavated with the goal of reconstructing both their initial construction and ultimate deposition. Would there be enough wall debris to indicate the presence of a second story? Initial Chimney Rock excavations in 1920-1922 hinted at some unusual roof construction practices so special care was taken when encountering roof debris such as beams and clay to inform on and/or confirm these conclusions.

Both the construction and role of Chimney Rock Great House Pueblo in the larger Chaco Region have been interpreted based on a single tree cutting date of A.D. 1076 from the East Kiva ventilator, and thirteen tree cutting dates of A.D. 1093 from Room 8. Both A.D. 1076 and A.D. 1093 correspond with major lunar standstills, when the moon rises between Chimney Rock and Companion Rock.

Eddy contends the pueblo was constructed in a single, planned event in A.D. 1076 by Chacoan priest/colonists, then re-roofed in A.D. 1093. Other researchers have suggested the structure was built in A.D. 1093, and the A.D. 1076 sample represents reused materials. Data from the 2009 excavations can’t prove or disprove either hypothesis. However, additional samples provided additional evidence of the major construction event in A.D. 1093 and additional earlier materials. Wood samples dated to circa A.D. 1018 (a date which corresponds with a major lunar standstill) and A.D. 1011 (corresponding to a minor lunar standstill) suggest earlier structures were built commemorating astronomical events and their wood was incorporated in the late 11th Century Great House.

Dr. J. McKim Malville, professor of Astrophysics at the University of Colorado at Boulder and principal investigator of the Lunar Standstill cultural theory at Chimney Rock and Chaco Canyon, argues that Chimney Rock was an astronomical observatory, built and sited to correspond to major lunar standstills to bolster the esoteric knowledge and power of the priests of Chaco Canyon 93 miles to the south.

Finally, the excavations at Chimney Rock were meant to inform on the concepts of emulation vs. export. Eddy hypothesized that Chimney Rock was an export built by Chacoan priests. Other archaeologists have postulated that perhaps outliers like Chimney Rock were more akin to emulations of Chaco Canyon rather than actual exports. Hidden construction characteristics found to be similar or identical to those at Chaco indicate export.

The excavation within Room 7 captured the imagination of excavators and visitors from the beginning. Directly under the roof fall braided corn was encountered. Imagine braids of corn hanging from a roof. The room contained rich cultural deposits and features. Excavators found a corrugated gray ware jar in a corner of the room; as excavations continued, they were able to determine that it was set into the floor. Indeed, a series of floors was present, indicating a sequence of use. The corn from Room 7 was later analyzed and shown to belong to two different genetic strains. Chemical analysis also showed that it had been grown Great House Excavation/StabilzationGreat House Excavation/Stabilzation locally. The analysis applied to the materials from the 2009 excavations would have sounded like science fiction to early excavators at Chimney Rock. What advances will we see in the future?

Excavators in Room 5 faced the daunting prospect of removing great quantities of roof fall and wall debris without finding as many exciting materials as those working in Room 7. The room had very little cultural material in it, nearly as if it had been cleaned out. A grizzly bear jaw, atop a thick adobe floor, was one of the provocative finds within this room. Bears may have been of ritual importance at Chimney Rock; a bear effigy had been found at the Guard House during the 1920s excavations and a bear paw petroglyph was previously located in the High Mesa group. Beneath the floor, two features were cut into the bedrock (a hearth and a pit); perhaps this area was once outside the main room block.

By carefully combining information gained during previous excavations (using photographs and notes dating back to the 1920s) with recent research and their own observations, Jason Chuipka of Woods Canyon, drew the following conclusion regarding the construction of the Chimney Rock Great House: Chimney Rock Pueblo is clearly Chacoan, built by Chacoans or under the direction of Chacoans. Chimney Rock Pueblo is not a “local copy” or emulation of the Great Houses in Chaco Canyon. Key Chacoan attributes present included: wall width, core/veneer wall construction, kiva attributes, buttress rooms to support kiva fill, archaeoastronomical orientation of building, scale of construction. Missing Chacoan attributes were vents and T-shaped doorways. The presence of a second story remains an open question. The amount of fill removed from Rooms 5 & 7 is not adequate to represent a second story. However, there could have been a second story elsewhere in the structure (i.e., Rooms 10 & 11 excavated by Jeancon).

In addition to helping interpret who constructed the site, the architectural documentation will provide a baseline for future stabilization needs.

PHASE III – MORTAR WORK and BACKFILL
The overall efforts to stabilize the site ranged from collecting data on how water moved through the site to analyzing mortar types and different fill sources to find appropriate stabilization materials to the back-breaking work of repairing walls and backfilling portions of structures. This work was undertaken by two archaeological consulting firms: Woods Canyon and Petrographics, with the expert assistance of crews from Salmon Ruins (San Juan County Archaeological Research Center, New Mexico).

During the summer of 2010, it was not uncommon to see Chris Zeller of Petrographics pouring water across the top of a masonry wall and then chipping away at old Portland cement to improve drainage. Re-setting or removing stones to help water drain away from walls rather than through them was a considerable task. The crew from Salmon Ruins worked hard into the fall of 2010, repointing walls and then beginning the backfill process.

In 2011 backfill was finally completed, as helicopters were used to drop loads of dirt into the Great House to equalize fill. Today there are few adjacent rooms with a greater than one meter fill differential. This project should keep the stabilized structures at Chimney Rock standing for the enjoyment of future generations and reduce annual stabilization requirements. 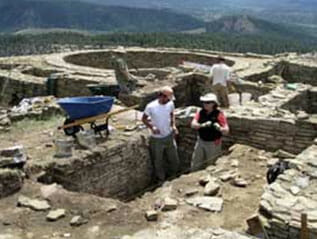 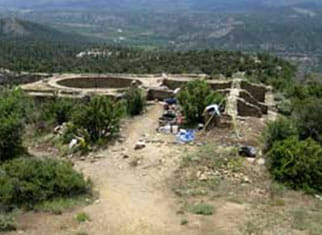 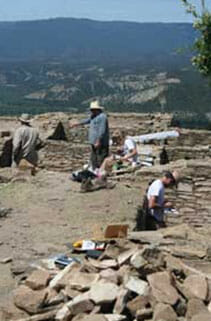 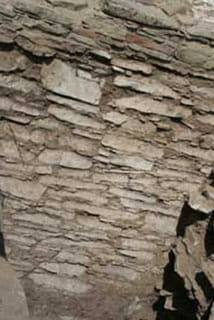 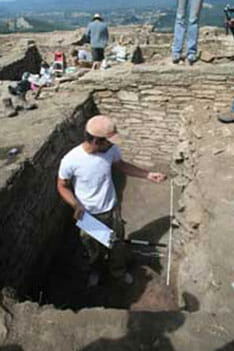 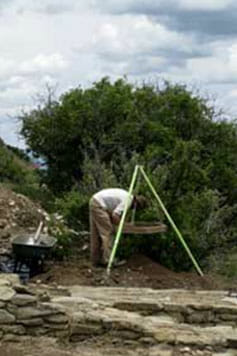 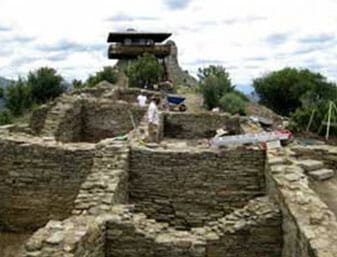 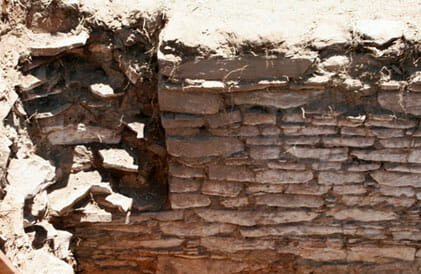 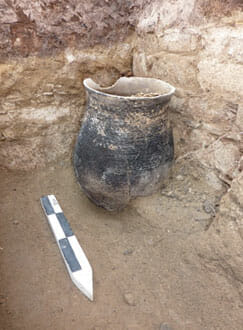 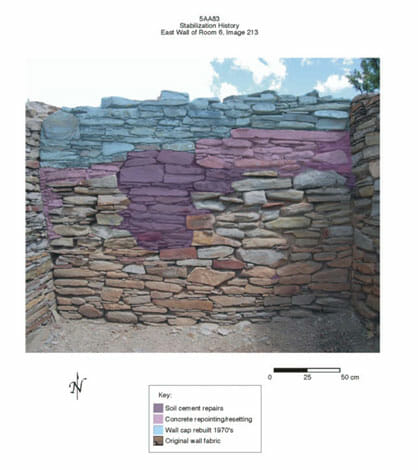 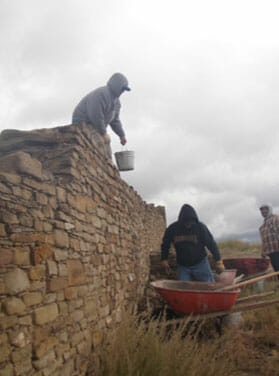 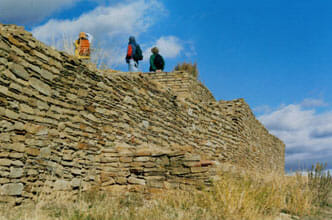