Description: This member of the Rose Family is a low, spreading shrub with many branches and can reach a height of 10 feet. The leaves are small, wedge-shaped, and slightly hairy with three lobes looking somewhat like Big Mountain Sagebrush. The pale yellow flowers are typical of wild roses in that they have 5 petals, 5 sepals and lots of stamens. The blossoms are fragrant and very beautiful but can easily be confused with Cliffrose which grows in similar habitat. However, Bitterbush’s flowers are deeper yellow and its leaves are always three-lobed. The dense foliage appears on multiple stems. Blooms appear in early spring. Also known as Antelope Bush, it is common throughout the Western US and indicates wetland areas.

Where to look: You’ll find Bitterbush at the intersection where the lower trail splits into a loop.

Uses:
-Ingesting its bitter leaves induces vomiting.
-Leaves may be used for a cough syrup.
-Ute Indians used a potion made from the inner bark as an eye wash.
-This is a major Navajo plant dye producing a gold dye.
-Mule deer browse on the twigs year round.
-Shredded bark made cradleboard padding or pillow stuffing as well as baby matting that didn’t give children a rash like Utah juniper matting.

Description: As its name tells you, this is an aromatic shrub that some people find offensive; thus it is also known as Skunkbrush. This non-poisonous member of the Sumac family has several poisonous relatives including Poison-ivy, Poison-oak, and Poison Sumac. However, this family also includes things you like to eat such as Cashews, Pistachio nuts, and Mangoes. Shrubs are well branched with 3-lobed leaves and small red-orange fruit after blooming in May.

Where to look: Bushes are found around the picnic area at the visitor cabin and on the lower trail switchbacks about half way to the Pit House Site. Also look on the right just before reaching the Great House Pueblo.

Uses:
-Berries were used to treat open sores.
-Sumac tea is very tart.
-Ancestral Puebloans used the branches in basket making.
-A concoction of the leaves makes hair black.
-Modern-day Navajos use the berries to make a pudding.

Description: Thickets of Mountain Mahogany can be more than 6 feet tall. After the small, petal-less flower has been pollinated, it produces a long plume that twists and creates a silvery haze over the shrub from summer into winter. Leaves are notched and veined; the bark is gray.

Where to look: Mountain Mahogany is common along both the upper and lower trails.

Description: Also known as Wild Mock-Orange, this beautiful, white-flowered shrub blooms in May and early June. When in blossom, it is Chimney Rock’s most noticeable spring blooming shrub. The four-petaled flowers, nearly an inch wide, grow close to the stem and may be tinged with purple. The fragrant flowers produce a narrow brown capsule-like fruit on many-stemmed shrubs that stand 3 to 6 feet tall.

Where to look: It is found on the rocky slopes of Chimney Rock’s high-mesa.
Uses:
-The Hopi used for ceremonial purposes.
-Navajos used an infusion of the inner bark as a treatment for swallowed ants.
-Ancestral Puebloans appear not to have eaten the fruit.
-The wood hardens when heated, making it an important wood for arrow shafts and points, for weaving forks, knitting needles, and other articles requiring hard wood.

Description: These trees/shrubs tend to grow in dense thickets and are often an under story species with Ponderosa Pine. This small shrubby tree is an important food for wildlife as deer browse on the plants and wild turkeys, squirrels, chipmunks, and bears as well as deer feed on the acorns. Gambel Oak can reach a height of 30 feet but usually is shorter. The leathery leaves are deeply lobed and fall colors range from yellow to red to brown with the leaves often clinging to the tree throughout the winter.

Where to look: This shrub is found throughout Chimney Rock National Monument.
Uses:
-An important food of the ancient peoples of Chimney Rock who probably ground the acorns into a meal or flour to make bread, mush, or soup.
-The amino acids in Gambel oak acorns, combined with corn, made a nutritionally complete food.
-Bark treats gum disease, sore throat, first and second degree burns.
-Chew leaves for swelling from insect bites.
-This hard wood is suitable for making bows, war clubs, snowshoes, weaving tools, throwing sticks, and digging sticks.
-Used to create tan and gold dyes.
-Oak is an important plant in Hopi and Navajo ceremonies.

Juniper
Description: There are three species of Juniper at Chimney Rock-Utah, which typically has a single trunk; One-Seeded which has multiple trunks; and Rocky Mountain. Utah Juniper and Pinyon Pine are the predominant trees growing in the dry Southwest and on Chimney Rock’s High Mesa. This shrubby evergreen has leaves that are scale-like rather than needle-like (as in the pines) and has a distinct odor different from pine. The marble-sized, reddish brown or bluish berries are covered with a powdery coating. Bark is gray and shreddy. Trees may reach a height of 40 feet.

Where to look: Junipers are found throughout the Chimney Rock National Monument.
Uses:
-Various Pueblos use juniper tea as a diuretic, for internal chills, for colds, stomach disorders, constipation, and rheumatism.
-Many Puebloans associate juniper with birthing. Pueblo women drink juniper sprig tea during labor or just after giving birth and bathe mother and baby in a liquid concentrate.
-Use powder from inside the bark for earaches.
-Hopis use an extract of juniper and sagebrush leaves to treat indigestion.
-Juniper berries may have been a food for the Ancestral Puebloans at Chimney Rock, especially a famine food.
-Ancestral Puebloans used the wood as construction material and for firewood.
-Juniper is used for corrals and hogans. Volatile oils in the wood prevent rotting.
-Juniper bark is easily stripped in long, loose strands from mature trees and was used by Ancestral Puebloans to manufacture cordage, legging, insulation, roofing material, and even toilet paper.
-The Hopi string the seeds into necklaces.
-Use to create yellow to orange-tan dyes.

Description: Rabbitbrush, also known as Chamisa or False Goldenrod, is one of the West’s most spectacular fall blooming shrubs. Its dense yellow clusters of goldenrod-like flowers decorate the hillsides of Chimney Rock from late August through early October. The slender leaves are silver-green in appearance and the twigs are covered with felt-like matted hairs. Rabbits and other browsing animals feed on the leaves and seeds of this shrub. With extremely deep roots, rabbitbrush can grow in normally very dry areas.

Where to look: It is most visible along the roadside into Chimney Rock and around the cabin parking lot.
Uses:
-Ancestral Puebloans used it primarily as a fuel.
-Use rabbitbrush tea as a gargle for colds and a bath for fever patients.
-Chew the root as chewing gum.
-At San Felipe Pueblo, they ate the flower buds.
-Navajos add the greens to a stew.
-The Hopis made arrows and wicker mats from stems.
-Some modern day Puebloan people use it for basket making.
-Flowers and stems are used today by the Navajo and Hopi to make yellow and green dyes.

Pinon Pine
Description: Have you ever eaten the tasty seeds of this tree? This pine was one of the most important food plants of the Ancestral Puebloans. Pinon nuts provided a high energy food (3,000 calories per pound) for the early residents of Chimney Rock. This pine is a shrubby looking tree with a rounded bushy appearance that may grow to a height of 35 feet, unlike its relative the Ponderosa Pine which grows straight and tall. The Pinon Pine has only two short needles per bundle. The tree usually grows in dry, rocky places between 3,500 feet and 6,500 feet in elevation and is usually found growing with Utah Juniper. Pinon bark is rough and dark.

Where to Look: These nut-bearers are found throughout the Chimney Rock National Monument.
Uses:
-Pinon pitch can be powdered and sprinkled in wounds as an antiseptic or mixed with warm tallow and placed on sores to draw out infection.
-Pitch is also chewed as a gum or chewed and swallowed for a cold.
-Navajos and Hopis ate the seeds raw or roasted and even ground into nut butter.
-Pinon seeds contain all 20 amino acids that make up complete protein.
-Resin from the trees is used to waterproof baskets and pottery.

Ponderosa Pine
Description: Ponderosa Pine is a common evergreen tree that grows on dry hillsides and mesas and usually lives between 3,500 feet and 9,500 feet in elevation. Its name reflects its large size. It can grow up to 150 feet tall and can live as long as 300 to 500 years. Needles are in bundles of three and are long and slender. If you inhale in the deep crevices of the bark of mature trees, you will detect a scent resembling vanilla. Many wild creatures feast on the seeds of this important forest species. New cones appear in May. Even dead, Ponderosa Pines are an important forest resource. Dead trees are often home for a variety of plants and animals.
Where to look: Sniff the bark of the large specimens next to the visitor cabin and picnic area.
Uses:
-Drink a boiled concentrate of the root for urinary problems.
-At San Juan Pueblo, Ponderosa Pine needles have been chewed as a cold sore remedy.
-Native Americans ate the seeds of this tree, either raw or ground into flour to make bread.
-The needles, which contain Vitamin C, make a pleasant tea.
-The wood was used for roofing supports, ladders, and cradleboards.
-In times of need, Indians in the Southwest chewed the soft inner bark for its nutritional value. The cambium can be bitter so it was processed by pounding or grinding, then leaching with water.
-Because of the longevity of Ponderosa Pine and its sensitivity to seasons and drought, its trunk rings are especially useful in tree-ring dating used to determine prehistoric chronology. 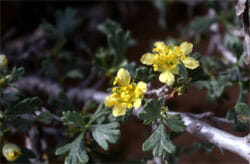 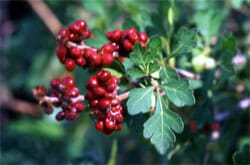 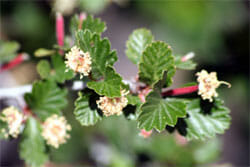 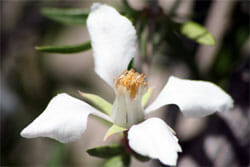 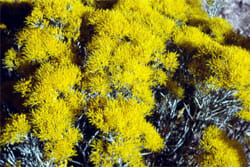 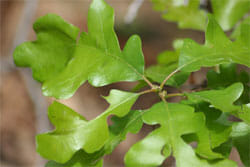 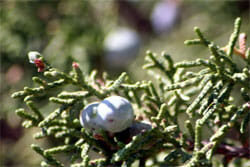 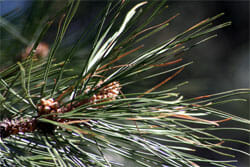