Past to Present:
Eons of time and a place very different from today created the geology of Chimney Rock and Companion Rock. Their origin begins in a vast shallow sea some one hundred million years ago. Clay and dead plants and animals built a layer of mud that was, eventually, a thousand feet thick, forcing the sea floor to settle as the entire western continent began to rise.

The mountains rose and the interior sea filled with fine sand from erosion of the new mountains. As the sea drained and shrank, its shoreline with beaches and tidal flats and river deltas followed, burying the ancient mud of the sea floor. Swamps and forests followed in turn. These wetlands and clam flats and peat swamps alternated, leaving layers of fossil shells and coal seams alongside the bones of the great land and sea beasts.

Beginning about 40 million years ago, volcanoes lifted the entire Colorado Plateau. Water and wind began to eat away the rock and soil covering the future site of the rock towers. Glaciers spawned by the Ice Age four million years ago vastly increased the grinding away of the ground. Finally, as the last ice melted and great floods washed away the debris, the thick hard sandstone of Chimney Rock and Companion Rock saw light. The ancestral Piedra River, swollen with melting ice and heavy rainfall, carved away at the softer sea-floor mud, leaving the thick tough sandstone shoreline of the ancient sea standing proud, a wall of hard rock towering more than 1500 feet above the wet valley floor.

As the last Ice Age ended and the earth warmed, the river lost its power to cut and chop away at the rocks. Wind and earthquakes took over the job, aided by sharp seasonal temperature changes that bit and chipped the stone away. Weaker parts of the wall yielded and left behind today’s twin towers, the last pieces of the once tropical seashore beaches to tell us of that vanished world of dinosaurs and sea lizards and palm trees. Today we can read the story of this place in the fossils and stones and landforms of the Chimney Rock National Monument, a book written by millions of years of life and change and catastrophe and slow erosion. The evidence is all around us.

At the Visitor Cabin:
The pine and juniper forest and grassland grow on Quaternary age alluvium – 12,000-year-old soil and clay of ground-up rock deposited by the Piedra River and Stollsteimer Creek during the last floods of the Ice Age. Across from the Visitor Cabin, the gentle slopes are the eroded edges of the stream channels, exposing the dark gray and black layers of the sea floor mud – the Late Cretaceous age Lewis Shale (80 million years old). Rich in carbon from sea life, this rock breaks down easily and weathers into the fine adobe clay that was used by the Chimney Rock people to cement their stone buildings, plaster their walls and floors, and create the beautiful pottery of daily life and special ceremonial use.

On the road up the cuesta:
Climbing the steep cliffs above the Visitor Cabin, look for the thin hard ledges of brown sandstone that separate the softer thin shale layers. This is still the Lewis Shale – the ancient sea floor – but here we see the evidence of the slow filling of the sea with fine sand from the distant new mountains. As you rise in elevation, you are moving from older to younger rock. At the crest of the cliff where the road flattens out, the sea floor lost its final battle and ahead stretches the rolling light-gray and brown surface of the seashore beach and tidal flats. Low hills and layers of soil cover much of this ancient sand, but this is the base of the Late Cretaceous Pictured Cliffs Sandstone formation (70 million years old). Much harder than the Lewis Shale, this rock layer is about 300 feet thick.

The road rises gradually in time as it climbs through the eroded sandstone. About a mile from the cliff edge it runs along the top of the sandstone layer.

At “Yucca Bend”:
At about two miles from the Visitor Cabin, the road passes through low hills of black coal and gray shale – the last remains of the 400-foot-thick Late Cretaceous Fruitland Formation (68 million years old). These are the compacted remnants of the swamps, floodplains, and peat bogs that filled in the old sea basin and buried the sands of the ancient beaches and lagoons.

In these weathered hills are pieces of petrified hardwood trees, leaf fossils, dinosaur bone fragments, clam and oyster shells, and soft black seams of coal. The Chimney Rock people certainly knew of these things. The petrified wood might have served as grinding or crushing tools; it is hard and brittle and may have been flaked and chipped into arrowheads and cutters and axe heads but we have not yet found such tools. The coal is a good fuel for a hot fire, but its fumes and noxious smell would have made it impossible to use for indoor heating. No evidence of coal use can be found. The well-drained soil here supports a forest of ponderosa pine and juniper which provided the people with strong straight roof beams and abundant construction material and firewood.

At the upper parking lot:
The parking lot and the rest of the tour are on the top layers of the Pictured Cliffs Sandstone. The thin remains of the Fruitland Formation have been weathered away here, leaving the hard surface of the sandstone and shallow valleys filled with soil and mud and gravel to support the pi – on and juniper forest.

The hard fractured sandstone provided excellent building blocks for the ceremonial and residential buildings, cemented and plastered by the clay mud of the weathered Lewis Shale and Fruitland Formation. Ground-up lime deposits provided whitewash for the buildings and iron-stained sediments added color to their walls. Gravel made up of flint, jasper, agate and chalcedony (all varieties of quartz) was used to make tools and arrowheads; stone cobbles of these quartz minerals as well as volcanic rocks, limestone, granite, and harder types of sandstone brought down from the high mountains by the Piedra River gave the people corn-grinders (metates and manos) and axe heads and hammer stones. Turquoise and shell traded from distant lands added jewelry and ornaments to their lives. Obsidian (natural volcanic glass) came by trade routes from Mexico, New Mexico, and Nevada as well as the nearby San Juan Mountains to make cutters, scrapers, and the finest arrowheads.

At the Stone Circle:
A short walk down the Great Kiva Trail takes you to the Stone Circle site carved into the Pictured Cliffs Sandstone. This small basin, at one time surrounded by a low stone wall or circle, lacks the intense red stains heat creates in this type of stone. The porous stone does trap rainwater for a day or two.

In the weathered surface of the slick rock of the Pictured Cliffs Sandstone are snaking trails of brown and black iron staining branching or twisting tracks. These are the fossil traces of a small crustacean called “Orphiomorpha,” named for the snake-like shape of its burrows. These small creatures, probably crustaceans like today’s sand shrimp, burrowed through the warm wet sands of the ancient beach for food. Their wandering burrows were stabilized by mucus, leaving the indentations of their feet in the walls. These burrows eventually filled with fine clay and iron-rich mud, hardening into the “corncob” trackways visible throughout the Pictured Cliffs Sandstone.

At the Great House Pueblo:
Built on a floor of Pictured Cliff Sandstone, this building was pieced together from some 6 million hand-gathered and shaped stones, cemented by mortar made from the clay of the Lewis Shale. Originally, the finished stone walls were covered by mud plaster and whitewash, protecting and hiding the masterful masonry work. Weather and time have left only the stones and mortar cement above ground. Although the ancient beach sandstone is hard, it does not last forever. Over the 1,000 years it has been exposed here, it is disintegrating.

The twin pinnacles:
The two rock towers are Nature’s shining monument. The remains of a thick pile of Pictured Cliffs sandstone, these two natural spires were carved by the massive floods of the ancestral Piedra River as the glaciers melted away from the high mountains. Why did these two towers persist when the rest of the sandstone was lost – Some element of chance always affects such processes. Generally, these towers are formed from the thickest and hardest portions of the ancient beachfront. Ancient river deltas dotted the shoreline and added more sand to the beaches. Shoreline dunes piled sand higher as well. Nature attacks the weakest points of any landform first, taking the course of least resistance, leaving the most hardened places for last.

Will they last forever – No. Even now erosion plucks small and large bits away. They have likely stood here for 25,000 years, and may last that long to come, but in the vast span of geologic time, they were born yesterday and will die tomorrow. 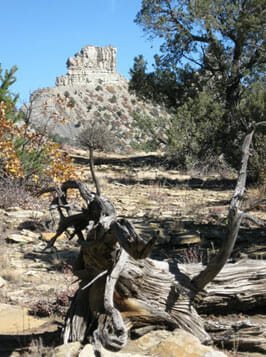 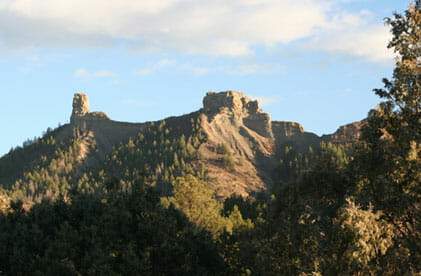 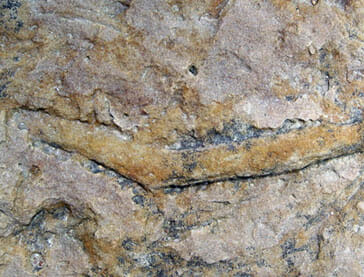